My Birthday with Barack

Yes, I had a BBQ dinner with Senator Obama. I have to admit it ranks up there with meeting Sting as far as brushes with fame go... or at least admittedly with men far better looking than I. Now, that it was my birthday was even cooler but I assume you don't really want to know all that. You want to know: What did you think? Will you vote for him? Was he "real"? Maybe even, why should I vote for him so early in the race to '08? I can't honestly say this guy has some magic quality that demands anyone should support him beyond the policies he has already outlined. But, I can tell you what I know. But first, a funny story...

A Funny Story
When Obama arrived in his RV, he had to wait for the media to set up. 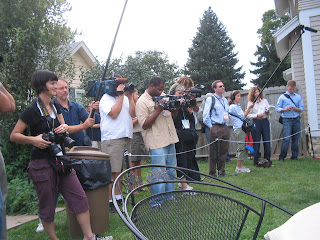 From inside, we could see them file past the front windows lugging their boom mics, cameras, etc. After they did, the Senator came out and began greeting relatives of the hosts who had assembled on the front lawn. Then, we saw the media folks file the other way past the windows and rather hurriedly. From out the side window, then, we could see Barack at the neighbor's porch -- suddenly filled with about ten people wielding their own personal cameras and craning their necks. Definitely a political move, but what else ya gonna do?

Character
First, he's cool, but in that politician way. He's no dummy. He knows the tricks of persuasion as any politician does. He's very gracious when he meets you and takes time to say your name, to get it right and to make you feel included. He makes eye contact. He's also casual and yet careful in his speech and movement. As I said, he's a politician. He's "on" at venues like this and unavoidably so.

But what he takes time for and what he does in the interactions spoke a lot, too. As we were running overlong in our group conversation, he made a concerted effort to politely remind us that he wanted to get everyone's question in. At that moment, he knew there were still three people who had not asked their question and -- here's the important point -- he knew which three people out of the ten of us.

Third, he really thinks about what he says when he talks. He does not spout platitudes or talking points. His speech is less polished and he doesn't hesitate to stutter a little, backtrack, or clarify. In this forum, at least, he seemed to genuinely respond to questions he said he had not heard before that moment. Jess, who saw him speak last Wednesday, said she had the same impression.

But I think what I have written here could be said of most politicians, at least the good ones, no matter which side of the aisle they claim to sit. So, why Barack? Why not Edwards? Why not Clinton? Hell, why not go for Kucinich at this point just in the hope that it moves the Dems more"left"? Responses to the first two candidates should be obvious -- Edwards is a hypocrite (even if a well-intentioned one) and Clinton is just too polarizing. The difference between Kucinich and Obama, though is a tough one. 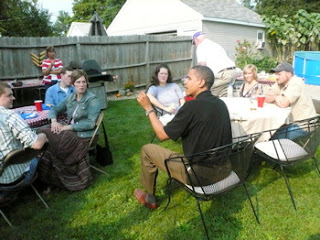 Economy
Where Obama is inexperienced, Kucinich is at least a veteran of political office. Yes, Kucinich is the strongest supporter of unions on nay ticket, he's vegan, he's a member of the Green party in all but name. But Naomi Klein's recent talk "Lost Worlds" and her book, The Shock Doctrine, has been weighing heavily on my mind. I think her analysis is sharp, her view of history insightful, and she's one of the sharpest thinkers we've got. But, if unfettered capitalism is bad for recovering communist countries, why should we think we can shock our own economy out of its excesses? If we withdrew from NAFTA and GATT as Kucinich has declared he would, what would happen? What void would be left and what would move into it?

Obama, on the other hand, recognizes the wide berth needed to steer the ship of the U.S. state. He may be inexperienced compared to some, but he's got a clear picture of just how much can be accomplished without precipitating disaster. Obama's health care reform works similarly -- we can't go to single-payer without untold consequences from large players like Blue Cross/ Blue Shield. He admitted that were he design a health care system from scratch, single-payer would be it. But we have to work with what we have.

Education
As far as education goes, I have both the most respect for his plan and the most questions. He talked a lot about including actual teachers in formulating education policy -- something other Dems are only just now starting to do. I also like his stance on limited standardized testing, whole child education, and pairing experienced teachers with newer ones as a form of merit for the experienced ones AND as a professional development opportunity for the newer. But this is where my question comes in -- he characterized this pairing and professional development model as a form of "assessment" instead of how NCLB does it. But I was confused over what was being assessed -- the teacher, the student, or the school. And how does an assessment of one bear on an assessment of another? Moreover, when I pressed him on the question of who does the assessment, he said he was in favor of a nation-wide consensus agreed upon "by experts." This puzzles me, too. Who determines an "expert?" Moreover, I tried to steer him toward some response regarding the diversity of the U.S. population and honoring different cultural norms. Sadly, his consensus response doesn't seem compatible with this.

That criticism aside, he is capable of seeing these points. He commented on how disillusioned teachers are under NCLB and on how the students who fail do so largely because they do not "fit" anywhere in the current was we school our children. Yet, his response seems to be simply that we educate poor and disadvantaged earlier and earlier like their white, middle-class counterparts. In effect, it's a 0-12 public education system. I would agree with him on the problem, but not the solution. The ways we assess child, teacher, and school have to accept difference -- racial, cultural, economic, regional, etc.

Fin
Explanations like the ten of us got are hard to come by on national news. So, it will be up to his team to see how he gets the message out. Certainly, he has the money. I think he's got the talent and the drive. He's better than what we have now, but what isn't? But I think I learned something today about this whole crazy election stuff -- it really is just a big job interview. That's all. Who do you really want to do this job? Does experience matter over principles? Does crude pragmatism translate to success? Or does the past record at many different levels transfer to the one being sought out by a candidate? If you have really looked at all the available candidates and you have a favorite, vote for that person. No. Matter. What. Anyone. Else. Says. 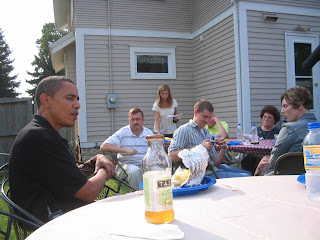 Very exciting for your birthday! The big question is: Did Obama sing Happy Birthday to you? Or did you not mention to anyone at the BBQ that it was that very special day?

I only mentioned my birthday upon discovering that it was also the birthday of another attendee's son. She had said she would attend only if her son could also since they were on their way to the State Fair in Des Moines. So, I got cake, but no one sang to me.

While I am at it, I would also add to my blog that while I disapprove of Sen. Obama'a military policy, especially with regards to nuclear weapons, I also think in the end that issue comes down to will someone use them or not. Like Kennedy, but unlike Bush, I do not think Obama is likely. He has reiterated several times "after all other avenues -- legal, diplomatic, economic -- have been exhausted." For what it is worth.

You inspired me to blog about a candidate over at my place;-)

Happy birthday (I'm singing happy birthday right now) a little late, Dave! Sounds like you had an interesting one. How did you come to be invited to such an event?