I love Minnesota politics. And not just because my grandpa was part of it, but b/c of its contributions on the national stage, too. Gene McCarthy's anti-war stance (and Humphrey's tepidness on that very issue as Johnson's VP), Mondale choosing Ferraro, Governor Ventura... and this: 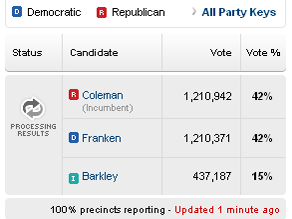 It'll be days before we know the end result, but Franken has done an amazing job and this is testament to the ways in which, as a population, Minnesota is open to some creativity.
Posted by Unknown at 11/05/2008