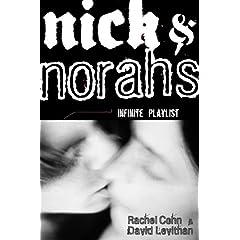 Going into it, I thought Michael Cera is getting typecast, Mark Mothersbaugh soundtracks have run their course, and I questioned what could come of the oft-used plot where uber-hip youths embark on a journey throughout NYC while set to glamorous music and shots of cultural landmarks. Happily, and while these things might indeed be true, the movie is alright. In some respects, it relies upon and is about reinventing the tried and true narratives. Rather than looking for the next big thing, the characters, like Thom, are focused on classics like The Beatles' "I Wanna Hold Your Hand" because they celebrate the little things. It's not about sex and orgasm, but spending time with someone, holding their hand. The movie echoes this same ethos in its concern with the neighborhood places of NYC as opposed to Times Square or Rockefeller Center's ice rink. It's -- and Mothersbaugh's -- love for the mix tape (or CD) reinscribes this ethos. It's not about the next big CD, but the untold little ones, the shifts between bands and songs and the way they get interwoven with our lives.

Sounds a little McCartney-esque, I know, but the movie pulls it off. Where McCartney's ouve suggests it is all about the silly love songs, this movie starts to get at the tension between the big and little. The characters are self-consciously hip, they *do* want (and have) sex, they seek fame to what degree they can. But the self-conscisous attempts at labeling, crafting an image, selling a defined product, or wanting what others want all come to naught. Fame, it would seem, come out of some other activity, some other creative process that eludes the regulated and regulating switchboards of control and mastery. Even more, when the big things rule our lives, we are ruined in the process.

So, the trick is to live within the tension between Desire (big-D) and our desires (little-d). Accept jouissance when it comes (pun intended), but don't ruin it by making it a foundation for action. This seems timely to me, if only because our social jouissance has led us to some grim times. Not long ago there was talk of an endless rise in the market, a swift victory in the middle-east, and an endless Republican majority in government. Yet, for all the values and ethics of Karl Rove, George W., and Dick Cheney, no one ever told them it wasn't about national orgasm. Politics, at its best, is about holding hands.
Posted by Unknown at 10/06/2008