Keeping Up With the... Well, not Joneses

Another blogger wrote about her trip up north and included pics to boot, so I feel kind of obliged to keep the two or three folks who actually read my blog updated with like info. So, here are some pics from Slim Lake in the BWCA: 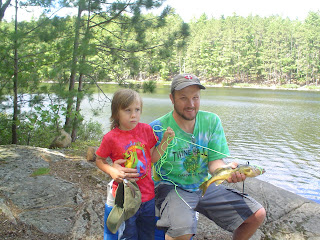 Solon's 15 inch northern pike. Good eats, if a little bony! It looks like I'm more proud of this accomplishment than Solon, but it may also be his dislike of getting his picture taken. 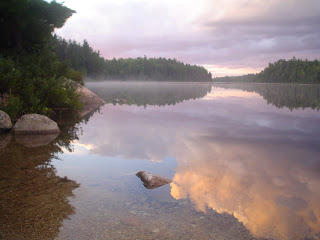 The calm after the thunderstorm! Perfectly calm, mist on the water and a gorgeous sunset! My mom took this as we portaged out.

Now, folks might call such experiences with nature, especially in "wilderness" areas sublime. But, like William Cronon, I would have to disagree -- at least, if they are sublime, they are not the kind of sublime Kant would say ultimately gives purpose to reason. It seems "sublime" is often very close to "wonder" in philosophical discourse. Really, at the base of it, doesn't Kant's sublime simply re-inscribe the 'gap' in knowledge Descartes says (like Plato before him) is caused by wonder? Doesn't "wonder" then, also point toward something transcendent? Yet, curiously, it is the emplaced, bodily, sensuous aspect of these experiences -- a heightened affect of being-in-a-(different)-place and living within unfamiliar rhythms -- that is often pointed out as what makes them worthwhile and often connects them to ethics.

It would seem to me that an argument for "wonder" as something that points toward transcendence of gaps or fissures in knowledge, even ethical knowledge, can only happen in a mind-body duality. But, given the writing on critical potentials of outdoor activity from recreation and leisure studies and ecopedagogy, wouldn't it make more sense to follow other critical theorists in a rejection of Cartesianism and thereby arrive at a sense of wonder that is immanent as opposed to transcendent? Wouldn't this seem to be more ethically consistent in terms of its ontology? Wouldn't this radically alter philosophy?
Posted by Unknown at 8/17/2008