It's been a hard day. Ruby has a massive ear infection in each ear, but is thankfully on amoxicillin and will be better in a couple of days. This was the morning.

In the afternoon, we had to put down our dog, Page. This was tough. Very tough. We had been deliberating this for at least a month, perhaps really since she had a cluster of seizures a couple months ago. She has lived with epilepsy for most of her life -- she wasn't quite a year when she had her first seizure. We treated it with phenobarbitol until the cluster. When the cluster came, we had, in fact, already discussed a change in medication with our vet. Her dosage had gone up to 240mg! This was a cause for concern, so we decided to switch over to some potassium bromide. Because this wasn't on our vet's shelf, and because there was no immediate cause for alarm, he had to order it. However, it didn't arrive in time. Still, the vet hospital switched her over when we brought her in.

This worked well to control her seizures; she only had a few during the two months she was taking it. However, her liver panel suggested some stress from the years of Phenobarb and the KBr wasn't going to do much good, either. Furthermore, she could no longer walk well on the hard wood floor, the linoleum, and sometimes the carpet (probably from the KBr). When she was on the carpet or outside, getting up for her was a chore. When she was on a slick surface and sometimes outside, getting up was impossible. She would often become stranded and simply bark incessantly until someone moved her.

So, we chose euthanasia. It sucks. It not at all how I expected it to end. It is still hard.

I'm working on an obit, though, since there are so many people who loved Page and love us but are far away. They will want to share in the passing of a dear friend. Here's a draft:

You do not have to be good.
You do not have to walk on your knees
for a hundred miles through the desert repenting.
You only have to let the soft animal of your body
love what it loves.
Tell me about despair, yours, and I will tell you mine.
Meanwhile the world goes on.
-- Mary Oliver, “Wild Geese”

A survivor in spirit, a gentle heart, a friend, died January 30, 2007. Rescued from under a porch in the high desert of Arizona, Page was what locals there call a “purebred Navajo Shepherd.” She lived through the mange, epilepsy, and a corncob lodged in her intestine, but was never defined by these things. Until the end, she fought back at the squirrels and loved to be outside whenever possible. We are happy to have given her twelve years she would otherwise never have seen. With great remorse, we chose to euthanize her after continued complications from a cluster of seizures two months ago. We plan a memorial service in the spring. All dogs will be welcome. 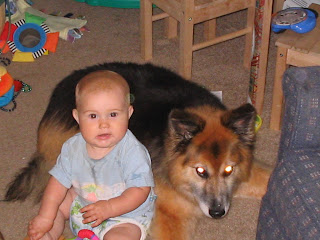 Page was an eternal sweetheart and I'll always love her. I will miss her friendly eyes, soft fur, and quiet demeanor but I'm glad to have been able to know her for so long. I know that Gaia will miss her too. Page shared her love with many.

Page'll get those squirrels someday.

I'm really sorry to hear about Page. For what it's worth, you did everything you could and she had a great home and family with you guys.

I'm so sorry! Page was such a nice dog. And I know how hard it is to make that decision to euthanize - I did the same thing for my almost 19-year old cat last spring.

How are your kids doing? It must be hard to lose a pet that you always remember being there.

I'm so sorry to hear about Page. Rest assured, she had 12 wonderful years with your family and I know you did everything possible for her epilepsy.

"My heart has joined the Thousand, for my friend stopped running today" --WD

Dave, sorry to hear about Page. I hope things are getting better on the ear infection and cold front. I also hope we can see you soon!
-Sarah

Page had a personality all her own and she will be missed. I hope that everyone is coping well with the sad loss.

Hope to see everyone soon...
-Nick